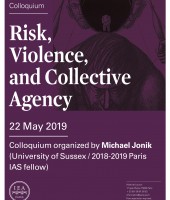 Many humanities and social science scholars have focused on the concept of risk to better understand the vicissitudes of our current volatile economic, ecological, social or political situations. At the same time, from another perspective, many scholars have also not only decentered the rational human subject as the key agent of historical or political change, but have further articulated non-anthropocentric materialist philosophies of distributed or collective agency. Together, these have called into question individual volition and acknowledged the precarious interdependence of human subjects with nonhuman actants.

Nonetheless, there has been comparatively little work to bring theories of risk and collective agency to bear on the question of violence, despite its historical and contemporary importance. This colloquium, then, will assemble a multidisciplinary group of literary scholars, philosophers, sociologists and historians to explore the interrelation of concepts of risk, violence, and collective agency. Participants will do so in a number of literary, historical and geographical contexts, such as Rimbaud’s or Zola’s Paris, Dostoevsky’s or Mandelstam’s Russia, or the 16th century French religious wars and the Armenian genocide. Conversations will engage the critical and philosophical work of Hobbes, Goethe, Arendt, Berlin, Derrida or Balibar. What is at stake is how theories of risk and collective agency might reveal new ways of understanding not only acts of violence or massacre, nihilism and collective political affect, collective will and democracy, or totalitarianism and genocide, but also the complexities of their aesthetic, literary, historiographical or sociological representations.

11:30 - 12:15   “‘Tinged with Blood’: Some Meanings of Violence in Poetry of the Russian Revolution”
Andrew Kahn (University of Oxford / Paris IAS)