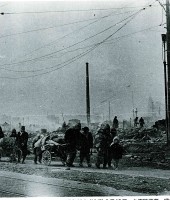 The war in Ukraine is only the most recent reminder of the toll of war on noncombatants. This one-day conference explores the disturbing question of how it became normal to seek to win wars by attacking cities and civil populations. The workshop brings together leading historians of the two world wars. They will discuss the historian Sheldon Garon’s essay-proposal on “The Global War on Civilians.” This path-breaking project covers what some have called the “second Thirty Years’ War” (1914-1945)—an era when developments in the First World War and interwar decades culminated in systematic attacks on civilians in the Second World War. The focus is on (1) aerial bombardment and civil defense against it, (2) hunger blockades and home-front food programs, and (3) strategies to “demoralize” enemy civilians while boosting “morale” at home. The project is a rare effort to tell a truly global story of the world wars—connecting the cases of Japan and China with Britain, Germany, France, the United States, Italy, Spain, and the Soviet Union.