Home / Events / The urbanity of a (pseudo)welfare state

The urbanity of a (pseudo)welfare state 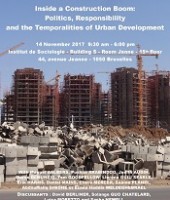 Talk by Pushpa Arabindoo (2017-2018 Paris IAS fellow) within the framework of the workshop "Inside a construction boom: Politics, responsibility and the temporalities of urban development", organized by the Laboratoire d'Anthropologie des Mondes Contemporains (LAMC) at the Université Libre de Bruxelles.

For almost all through the last two decades, the southern Indian city of Chennai has been a relentless construction site, witnessing all kinds of urban development projects (mega or not), and many of an infrastructural nature. Most have been launched by the regional government of Tamil Nadu, often emerging out of random political announcements aimed at proclaiming Chennai as a world-class city, with the state asserting a brutal hand in the form of evictions to ensure the realization of these visions. At other appropriate moments, the state paradoxically turns benevolent, simultaneously announcing welfare schemes aimed at the city’s urban poor and sometimes even extending to the middle classes, contradicting the very projects it has undertaken at tremendous financial cost. Few of these have seen completion so far with prominent ones such as the Metro Rail slashing through the city in incomplete bits and pieces, and others such as the new international terminal at the Chennai Airport so shoddily put together that tales of roof collapse and similar construction failure began to circulate almost from the day of its inauguration. With little evidence of worlding itself, Chennai is slowly turning out to be a spectral city in the making, signposted by veritable infrastructural ruins, and a collateral to the poorly conceived urbanity of a pseudo-welfare state. This paper is an effort to unravel this relationship between the falling apart of the city’s urbanity and the irrationality of the state, and in doing so suggests that there is a longer historiography to this ill-fated affair, one that cannot be simply defined by the at hand logic of neoliberal urbanism.