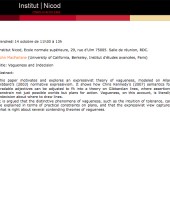 This paper motivates and explores an expressivist theory of vagueness, modeled on Allan Gibbard’s (2003) normative expressivism. It shows how Chris Kennedy’s (2007) semantics for gradable adjectives can be adjusted to fit into a theory on Gibbardian lines, where assertions constrain not just possible worlds but plans for action. Vagueness, on this account, is literally indecision about where to draw lines.
It is argued that the distinctive phenomena of vagueness, such as the intuition of tolerance, can be explained in terms of practical constraints on plans, and that the expressivist view captures what is right about several contending theories of vagueness.