Home / Events / Writing the city [into the urban]

Writing the city [into the urban] 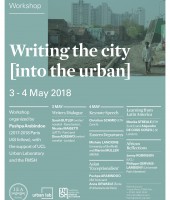 Workshop organized by Pushpa Arabindoo, 2017-2018 Paris IAS fellow, with the support of the UCL Urban Laboratory and the FMSH

In the aftermath of the May 1968 uprising in Paris, Henri Lefebvre published in 1970 his classic treatise La Révolution Urbaine where he pointedly placed the urban in the centre of this revolution, identifying a theoretical need for the concept of the urban as a planetary possibility, one he considered more appropriate than a redundant notion of the city as a social scientific object. With its English translation in 2003 there has been a renewed interest in his hypothesis of the planetarisation of the urban, triggering a contested debate of planetary urbanisation where the continued relevance of the city has become a moot point. As the resulting city/urban dialectical tension has led to a gratuitous intellectual standoff, there is an urgent need to clear the impasse and seek more fruitful modes of engagement.

This workshop is a step in this direction where, coming 50 years after the backlash of ’68, this event aims to establish a conversation between the city and the urban by drawing on the notion of ‘ethnographic theorisation’ where the theoretical potential of the urban can be harnessed from ethnographic insights of the city. It explores contingent ways in which the city can be written into the urban through manoeuvres that engage with the process of writing the city across disciplines from literary cultures to urban studies. The workshop is thus conceived in two parts: an evening where writers specialising in the ‘urban novel’ are in dialogue with academics to deliberate on two related writing frames of thinking the urban through the city – provincialism and cosmopolitanism, followed by a full-day workshop where academics reflect on regional city writing practices and what it means for a global urban theory building exercise.