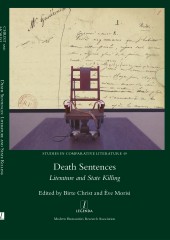 As Albert Camus once remarked: "Of capital punishment, people write only [...] in a low voice." Journalists and state officials alike use a carefully policed language when making any reference to the death penalty: when human beings are to be executed by the state, some key actors talk about what will be done in terms of legalities and procedures. Does fiction provide a counterbalance for that discretion, or simply echo it? What other perspectives can it bring into the foreground, and can literary language express a response to a supposedly necessary horror, or a terrible injustice, which other voices or media cannot?

Considering a range of major works from across Western Europe and the United States, from the 18th century until the present day, Death Sentences investigates the contribution of poetics to our understanding, past and present, of capital punishment. The sophisticated literary representations found in Hugo, Dostoevsky, Wilde, Kafka, Mailer, King and others offer a privileged vantage point from which to illuminate and critique a unique institution which itself relies heavily on spectacle and representation to be operative and legitimized.