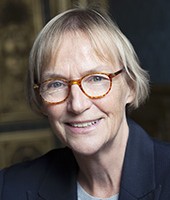 Professor
University of Copenhagen
Tristes Arctiques. Exploration, Ethnography and the Emergence of the Eskimo
01 September 2016 -
31 January 2017
Social anthropology and ethnology

Kirsten Hastrup is Professor of Anthropology at the University of Copenhagen. She has conducted anthropological fieldwork in Iceland and Northwest-Greenland (Thule), and carried out extensive historical research in these regions. She is the author or editor of 40 books and has published some 250 articles and book-chapters in English and Danish. Her work has been widely translated.She was the President of the Royal Danish Academy of Sciences and Letters 2008-2016. She is Fellow of the British Academy, and a member of the Norwegian Academy of Science and Letters. Her latest book, Thule på tidens rand [‘Thule on the edge of time’], was published in 2015.

Apart from the regional interest in the North, the key tenet of her research it the intertwinement of natural and social histories. She has also worked extensively on questions of knowledge and evidence in anthropology and on general issues of method and theory.

Tristes Arctiques. Exploration, Ethnography and the Emergence of the Eskimo

The project centres on Arctic anthropology and seeks to understand the entanglement of landscape, history and colonial encounter in the perception of the Inuit peoples. It takes off from a sustained interest in the history of Arctic exploration and from ethnographic fieldwork in Thule, NW-Greenland.

The main title of the project, Tristes Arctiques, echoes the work of Claude Lévi-Strauss, whose Tristes Tropiques (1955) remains an inspiration. The project develops his insight into the clash between the modern world and traditional life with a view to present day concerns in the Arctic, including the dramatic climatic changes, and explores how far ethnographic observations are coloured by the observers’ historical position.

Three main analytical moves are made: The first explores the perception of the Arctic frontier as partly made up of an overpowering nature making it impossible to live and study it from outside. The second develops the notion of a human terrain, as different from both territory and landscape, and related to the plasticity of perception and the eventness of place. Finally, the living resources by which the hunting communities live, offer an entry into inter-species engagement as part of the local life-world. Between them, these moves show how the intimate connection with the natural world has contributed to the perceived radical otherness of the Arctic peoples.

A Place Apart: An Anthropological Study of the Icelandic World, Oxford, Clarendon, 1998.

A Passage to Anthropology: Between Experience and Theory, London, Routledge,1995.

Nature and Policy in Iceland 1400-1800. An anthropological Analysis of History and Mentality, Oxford, Clarendon, 1990.