Home / Fellows / Moral acrobatics: How we avoid ethical ambiguities by thinking in black and white

Moral acrobatics: How we avoid ethical ambiguities by thinking in black and white 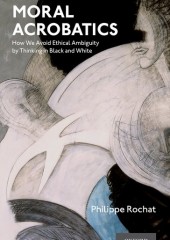 Rochat, P., Moral acrobatics: How we avoid ethical ambiguities by thinking in black and white, Oxford University Press (To be published during Fall 2020).

Although it is difficult for us to fathom, pure monsters do not exist. Terrorists and other serial killers massacre innocent people, yet are perfectly capable of loving their own parents, neighbors, and children. Hitler, sending millions to their death, was contemptuous of meat eaters and a strong advocate of animal welfare. How do we reconcile such moral ambiguities? Do they capture something deep about how we build values? As a developmental scientist, Philippe Rochat explores this possibility, proposing that as members of a uniquely symbolic and self-conscious species aware of its own mortality, we develop uncanny abilities toward lying and self-deception.