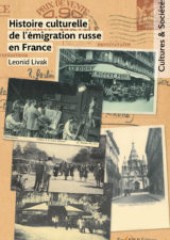 In the history of immigration to France, the Russian exile occupies a singular place. Around 1924, Paris became the artistic, intellectual and political epicenter of the Russian diaspora in Europe. The sociology was very varied, the revolutions, the Russian civil war and the humanitarian catastrophe that followed having thrown a heterogeneous Russian-speaking population on the roads of exile. Its cultural elite, equally numerous and eclectic, made it an original phenomenon.
The present work retraces the main lines of the cultural history of the anti-Soviet diaspora on French soil and reveals certain facets of it, hitherto unknown, in particular its transnational aspect, anchored in intellectual interaction, literary and artistic interaction with the French intelligentsia. Leonid Livak, who returns to the cultural mythology of emigration, also looks at the flowering of the Russian modernist milieu in France, sheltered from Soviet censorship, or on the interethnic tensions interethnic tensions underlying the process of communal disintegration of Russia in exile.