Home / Publications / From Control to Terror: German Prostitution Policies in Eastern and Western European Territories during both World Wars

From Control to Terror: German Prostitution Policies in Eastern and Western European Territories during both World Wars 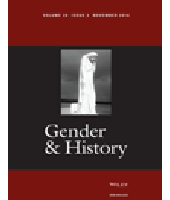 In both World Wars, the German armies enacted a prostitution policy in all the occupied territories of Western and Eastern Europe. Through a comparative study, this article uses archival research in Poland, France, Belgium and Germany as well as existing studies in five languages to examine the continuities and discontinuities in German prostitution policies between the Western and the Eastern territories during both wars. In exploring the question of continuity, we consider the interaction of local authorities with occupation forces and how prostitution policies in Western and Eastern countries differed from the German ‘home front’. Strong continuities existed between the First and Second World War, including a severe backlash against the abolitionist trend in Europe and the extension of regulatory controls beyond the prostitutes to include other ‘suspect’ women, often justified by concerns over the spread of venereal diseases and public morality and health. Despite these continuities, prostitution policies were even more regressive during the Second World War, with the racial ideology of Nazism as the main trigger for the brutalisation of prostitution policies. German authorities pushed the system to greater extremes, overseeing its evolution from control to terror.