Home / Publications / In the Orbit of Love. Affection in Ancient Greece and Rome

In the Orbit of Love. Affection in Ancient Greece and Rome 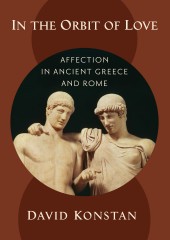