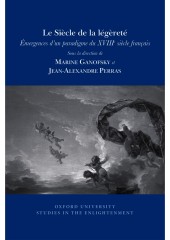 The age-old cliché that France is a light-hearted nation is echoed repeatedly throughout the eighteenth century and bears witness to the deep axiological, scientific and ethical upheavals which this volume explores. By analysing the importance of, and issues at stake in, these transformations, the articles gathered here tell the story of another age of Enlightenment: the story of an age of lightness.
Lightness is at the crux of how the French eighteenth century represents itself both in contrast with previous centuries and through parallels between European nations. The concept of lightness therefore constitutes an essential paradigm of the historiography that developed immediately after the French Revolution. The intellectual heirs of the eighteenth century do not only find in this period an age of reason, progress, Enlightenment and citizens’ rights; they also feel, at times, contempt, at other times, nostalgia for the alleged lightness of its mores, the futility of its taste or the frivolity of its childish ways. Between the industrious bourgeoisie of the 19th century exploiting the voluptuous representations of fêtes galantes and the fascination of our own 21st century for the delightful frivolity of Marie-Antoinette’s era, the 18th century in its lightness has never lost its charm. Yet, crucially, it also challenges the progressive narrative of the history of reason and usefulness in the definition of the very values on which our community is built.
It is therefore essential to analyse the concepts and values associated to the notion of lightness in the 18th century. Such an approach yields breakthroughs in understanding why, and to what extent, this idea of lightness has been related to the French national character in general as well as, more particularly, to its 18th century.

Marine Ganofsky is a lecturer in French literature at the University of St Andrews. Her research focuses on the eighteenth century and its quest for happiness. She approaches the topic through the lens of literature, aesthetics, philosophy and socio-cultural history. Her first book looked at libertine nights and she is now working on the concept of illusion in the Age of Enlightenment.

Jean-Alexandre Perras is currently resident at the Paris Institute for Advanced Study. His research deals with the history of values and the practices of sociability in the early modern period. He is currently working on the cultural and literary history of frivolity, in relation with luxury, gender, national representations and the question of usefulness in 17th- and 18th-century France.