Home / Publications / More Than Friends: On Muslim-Jewish Musical Intimacy in Algeria and Beyond

More Than Friends: On Muslim-Jewish Musical Intimacy in Algeria and Beyond 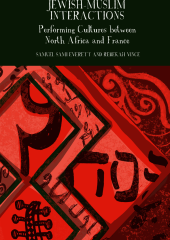 By exploring dynamic Jewish-Muslim interactions across North Africa and France through performance culture in the 20th and 21st centuries, we offer an alternative chronology and lens to a growing trend in media and scholarship that views these interactions primarily through conflict. Our volume interrogates interaction that crosses the genres of theatre, music, film, art, and stand-up, emphasising creative influence and artistic cooperation between performers from the Maghrib, with a focus on Algeria, Tunisia, Morocco, and diaspora communities, notably in France. The plays, songs, films, images, and comedy sketches that we analyse are multilingual, mixing not only with the former colonial language French, but also the rich diversity of indigenous Amazigh and Arabic languages. The volume includes contributions by scholars working across and beyond disciplinary boundaries through anthropology, ethnomusicology, history, sociology, and literature, engaging with postcolonial studies, memory studies, cultural studies, and transnational French studies.