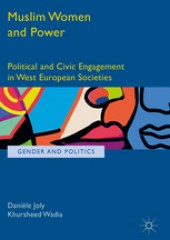 This book provides an account of Muslim women’s political and civic engagement in Britain and France. It examines their interaction with civil society and state institutions to provide an understanding of their development as political actors. The authors argue that Muslim women’s participation is expressed at the intersections of the groups and society to which they belong. In Britain and France, their political attitudes and behaviour are influenced by their national/ethnic origins, religion and specific features of British and French societies. Thus three main spheres of action are identified: the ethnic group, religious group and majority society. Unequal, gendered power relations characterise the interconnection(s) between these spheres of action.