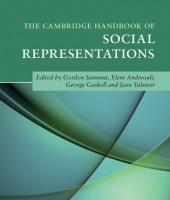 How do societies reproduce? Berger and Luckmann (1966) popularized the idea of a continuous reconstruction of society; they showed the importance of education of individual members in this reproductive reconstruction. Societies are enacted and reproduced by human behaviour, through practice.

In this reproduction process through which successive generations reproduce and Gradually modify society, representations play an important role. Earlier, Moscovici had shown in his seminal work on psychoanalysis (1961/1976) how the process of social construction operates on the psychological level. He discovered the mechanism by which new social ‘objects’ emerge: anchoring their representation in previous cultural notions, through debate between stakeholders, until they become reified ‘social representations’ which in turn may serve as anchors for future cultural innovations.

This chapter focusses on the specific role social representations plays in the larger chicken and egg societal evolution outlined above. It does so via a pragmatic perspective (installation theory), which attempts to explain the phenomenon but also to provide the tools for regulators and change agents. The first part of the chapter provides a framework – installation theory – to describe how societies scaffold, shape and control individual behaviour and the specific role of social representations in that framework. Human behaviour is determined at three levels: affordances of the environment; embodied competences in actors; social influence and rules by other actors and institutions. An installation will be defined as a socially constructed system with three such layers, which guides a specific activity by suggesting scaffolding and constraining what society members can/should do in a specific situation (Lahlou, 2008, 2011a). Installation theory is a theory for nudging (Thaler and Sunstein, 2008).