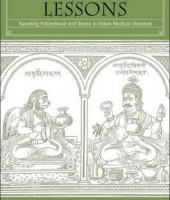 Looks at narrative in the history of ayurvedic medical literature and the perspectives on illness and patienthood that emerge.

In ayurvedic medical practice, the ways in which and the reasons why people become ill are often explained with stories. This book explores the forms and functions of narrative in Āyurveda, India’s classical medical system. Looking at narratives concerning fever, miscarriage, and the so-called king’s disease, Anthony Cerulli examines how the medical narrative shifts from clinical to narrative discourse and how stories from religious and philosophical texts are adapted to the medical framework. Cerulli discusses the ethics of illness that emerge and offers a genealogy of patienthood in Indian cultural history. Using Sanskrit medical sources, the book excavates the role, and ultimately the centrality, of Hindu religious thought and practice to the development of Indian medicine in the classical era up to the eve of British colonialism. In addition to its cultural and historical contributions to South Asian Studies, the medical narratives discussed in the book contribute fresh perspectives on medicine and ethics in general and, in particular, notions of health and illness.

“Somatic Lessons adds considerably to our understanding of Āyurveda … the extensive narrative sections of the texts that are Cerulli’s primary concern have been consistently undervalued in the scholarly record. Cerulli demonstrates the decisive importance of these narrative sections in not only providing a cultural and religious backdrop to these texts, but in showing how they actively regulate the entire system and are important in themselves. This book is highly original in concept and delivery, and intelligently addresses an important area of Indian medical and cultural history.” — Frederick M. Smith, coeditor of Modern and Global Āyurveda: Pluralism and Paradigms

“Somatic Lessons is one of the most engaging pieces of scholarship that I have read in recent years. It is well written, clear, and illuminating. The work is a most important piece of scholarship in studies of Sanskrit medical literature and its relationship to Sanskrit brahmanical literature and is almost certain to create much discussion in various academic circles.” — Kenneth Zysk, author of Religious Medicine: The History and Evolution of Indian Medicine

Intended Audience
Plan of the Book

Medical Context and Organization
Bodytalk I: Diseases, Prognoses, and Therapies
Bodytalk II: The Three Humors
Medical Storytelling
Sources of Āyurveda: Carakasaṃhitā and Suśrutasaṃhitā
Is there an Ayurvedic Way of Thinking (about the Body)?

Text-Historical Framework of the Kāśyapasaṃhitā
Compendium Contents
Definitional Issues
The Narrative of Miscarriage
Character Sketches
From Heaven to Earth, from Goddess to Avatar
Reality and Experience: Men Attending to Women’s Bodies
Nature versus Nurture

6. THE JOY OF LIFE OF ĀNANDARĀYAMAKHIN