The True History of Fake News 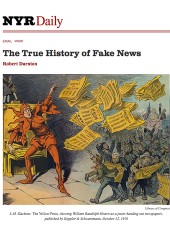 In the long history of misinformation, the current outbreak of fake news has already secured a special place, with the president’s personal adviser, Kellyanne Conway, going so far as to invent a Kentucky massacre in order to defend a ban on travelers from seven Muslim countries. But the concoction of alternative facts is hardly rare, and the equivalent of today’s poisonous, bite-size texts and tweets can be found in most periods of history, going back to the ancients.

Procopius, the Byzantine historian of the sixth century AD churned out dubious information, known as Anecdota, which he kept secret until his death, in order to smear the reputation of the Emperor Justinian after lionizing the emperor in his official histories. Pietro Aretino tried to manipulate the pontifical election of 1522 by writing wicked sonnets about all the candidates (except the favorite of his Medici patrons) and pasting them for the public to admire on the bust of a figure known as Pasquino near the Piazza Navona in Rome. The “pasquinade” then developed into a common genre of diffusing nasty news, most of it fake, about public figures.