Home / Publications / A glimmer of light amidst the darkness: honour in the First World War

A glimmer of light amidst the darkness: honour in the First World War 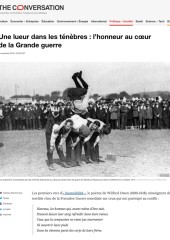 Jasper Heinzen, "A glimmer of light amidst the darkness: honour in the First World War", The Conversation, November 8th, 2018 [online]
Seen on November 8th, 2018, URL: https://theconversation.com/a-glimmer-of-light-amidst-the-darkness-honour-in-the-first-world-war-105587

The first lines of Wilfred Owen’s poem ‘Insensibility’ (1893 – 1918) bear testament to the chilling impact of the First World War on those who participated in it:

Happy are men who yet before they are killed
Can let their veins run cold.
Whom no compassion fleers
Or makes their feet
Sore on the alleys cobbled with their brothers.

The sacrifice of more than 16 million lives on the altar of an unfeeling war machine and the traumatisation of millions more, which Owen, writer Jean Norton Cru and other like-minded eyewitnesses so evocatively captured, have become the point of reference for the modern remembrance of 1914-18. It is easy enough to understand why the horrors of the trenches, the introduction of ever more efficient methods of killing and atrocities like the Armenian genocide have left such an indelible impression on the collective imagination.

And yet societies’ adaptation to what the Dublin historian John Horne has termed the “totalitarian tendencies” of the Great War cannot be reduced to the corrosive effects of trauma alone. Rather than rendering combatants “insensible”, as Owen believed, the long duration of the war actually owed a great deal to citizens’ emotional mobilisation for higher ideals. While the choice of belligerent nations to frame their struggle in terms of a “last crusade” might be dismissed as a propagandistic tool to shame the enemy, the rhetoric of chivalry counteracted the inhumanity of the conflict in sometimes surprising ways.