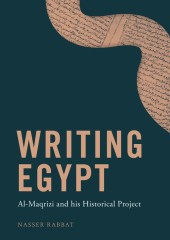 This book recounts the life of Egypt’s greatest historian, analyses his work and assesses its impact then and now.

Although al-Maqrizi is recognised as the most influential historian of pre-modern Egypt, he has never received the probing historical treatment warranted by his standing and scholarly output. This book fills that gap. Arranged in three sections, it tells al-Maqrizi’s life story in the first, weaves it with historiographical, textual and methodological analysis of his oeuvre in the second, and reconstructs the afterlife of the author and his work down to the present in the third part.