Home / Videos / Adventures of Identity: From the Double to the Avatar

Adventures of Identity: From the Double to the Avatar 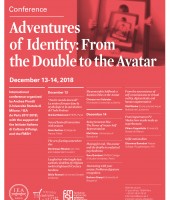 Recent developments in image-making techniques have resulted in a blurring of the threshold between the image world and the real world. Immersive and interactive virtual environments elicit in the perceiver a strong feeling of being incorporated into an autonomous world. Such incorporation can be conveyed by the “avatar”, a digital proxy through which the subject interacts with synthetic objects or other avatars.

Far from being a term coined in contemporary times, the notion of “avatar” is rooted in the ancient Hinduist tradition: the Sanskrit term refers to the descent on earth, the material appearance, the sensible manifestation or incarnation of a god or goddess (mostly Vishnu). In Western culture, it has come to be associated with cognate notions such as the “double”, the “alter ego”, the “Doppelgänger”, the “hologram”.

Manifold transdisciplinary issues are raised by the experience with the avatar.

From the angle of the history of images, not only it constitutes a fundamental chapter in contemporary visual practices, but it also represents a significant variation of the genres of the portrait and self-portrait, which can hybridize as well with the production of the “selfies”. From a philosophical, anthropological and sociological perspective, the avatar impacts on fundamental questions related to identity, subjectivity and intersubjectivity. From a psychological, psychoanalytic and neurological point of view, it is linked to questions such as multiple or split personality, embodiment, body ownership, self-representation, proprioception, prosthetic implementations, empathy. From the vantage point of media studies it represents the digital intermediary through which the user interacts with the virtual environment and other users. Ethical, legal and political issues are also crucial in the avatar experience, since not only through avatars we operate in the digital world, but also avatars can reverberate their effects onto the real life, modifying for instance gender, ideological and racial biases. The avatar can be employed to stress the “authentic” representation of the self, but it can also be used to disguise one’s identity, becoming veritable masks: imitative simulation on one side, deceptive dissimulation on the other constitute therefore the two extremes spanned by the versatility of the avatar.

As always happens with technological and medium-related innovations, the diffusion of avatars triggers remarkably polarized reactions: on the one hand the techno-enthusiasts (who optimistically hail the possibility of living multiple lives inside parallel worlds), on the other hand the techno-apocalyptics (who fear identity loss, liquefaction and alienation). The rift between these two parties is expected to further increase in the next future, given the enormous technological and economic investments in the development of virtual environments in general and virtual avatars in particular.

By convening scholars from different disciplines, the colloquium aims to critically address these multifarious issues, discussing the problematic and controversial status of the avatar, which is in urgent need of definition.