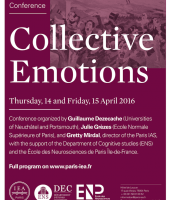 14/04/2016
Institut d'études avancées de Paris
Conference organized by G. Dezecache (U. of Neuchâtel and Portsmouth), J. Grèzes (ENS Paris) and G. Mirdal, director of the Paris IAS, with the support of the Department of Cognitive studies (ENS) and the ENP

Since the writings of the first social psychologists and sociologists of the 20th century, collective behavior has continuously been perceived as a fundamental threat to social and political order. When immersed in large groups, individuals are thought to lose any capacity of self-evaluation and to show anti-social behavior. In crowds, the increased sensitivity to others’ emotions – whose power of contagion was long thought to be as intense as that of infectious diseases – is supposed to turn a reunion of perfectly rational humans into a group of violent rioters. Furthermore, the primordial role of mass movements during the era of totalitarianisms has, without any doubt, reinforced the idea that collective emotions are essentially harmful, for both individuals and communities.

Recent collective movements, such as Occupy Wall Street or the Arab Springs, have however shed light on a different aspect of collective behavior. Rather than being deleterious in essence, emotional collective movements are above all sources and mechanisms of social changes. They may also constitute a fundamental step in the process of community resilience, as seen in the spontaneous mass demonstrations organized in Paris following the attacks in Paris in 2015. The idea that the collective is a source of both individual and collective achievement is at the heart of the modern social psychology of crowd behavior.
This essential tension at the heart of collective behavior – a source of both individual and collective achievements but also a factor of potential escalation of violence and conflict, in particular towards the out-group – is still persistent in contemporary debates. Mass movements are once again becoming major political actors, and the development of new information technologies (such as the online social networks) has largely increased the communities’ reactiveness and ability to mobilize. It thus appears urgent to call for a scientific meeting on the topic of collective emotions, their causes and consequences for both individuals and communities, and their very dynamics, in the past as well as nowadays, in the digital era.

Seven fundamental themes will be explored: (1) what does it mean for emotions to be collective rather than individual?; (2) how has collective behavior classically been perceived since the nineteenth century?; (3) what role do emotions play in the emergence and consolidation of mass political movements?; (4) how is group behavior structured and sustained?; (5) what are the individual and collective psychological consequences of the participation to emotional collective movements?; (6) how can political institutions react to and cope with mass movements (collective and individual responsibility)? ; (7) finally, what role do online social networks play in the mobilization of the masses?

Imagining the Worst: the black legend of collective revolt in the 19th century France, c. 1840 - 1895 - Robert Tombs (University of Cambridge)

4/ On the role of a social identity analysis in articulating structure and collective action: the 2011 riots in Tottenham and Hackney - Clifford Stott (Keele University)

1/ Beyond "contagion"? Social identification as boundary condition and mechanism in involuntary influence of aggression - John Drury (University of Sussex)

1/ Empathy in music and dance: the role of pleasure and emotion - Morten L. Kringelbach (University of Oxford)
2/ The social function of emotional displays of fear and anger - Julie Grèzes (INSERM U960 - Ecole Normale Supérieure of Paris)

Session 7: Far from the madding crowd: the psychology and neuroscience of exclusion and social pain
Chair: Julie Grèzes (INSERM U960 - Ecole Normale Supérieure of Paris)