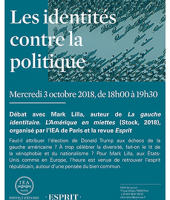 Organized by the Paris IAS and Revue Esprit, on October 3rd, 2018, as part of "L'esprit du temps" series of debates.

Is Donald Trump's election to be attributed to the failures of the American left? Celebrating diversity too much, is it the bedrock of xenophobia and nationalism? For Mark Lilla, in the United States and Europe alike, the time has come to rediscover the republican spirit, around a thought of the common good.

The term identity is generally associated with the right. But for Mark Lilla, it also applies to a left that has, in recent years, favoured a policy of symbolic recognition of groups and individuals over a policy of large-scale solidarity that would make it possible to meet the economic and social challenges of our time.

Observing this phenomenon first in the United States, where he would partly explain the failure of the Democrats in the last elections and the victory of Donald Trump, Lilla wonders in her latest book, La Gauche identitaire. L'Amérique en miettes (Stock, 2018), beyond the American case, on the development of a narcissistic individualism, surprisingly compatible with economic individualism, which undermines the sense of the common good and the civic spirit.

Is it possible to break with this dynamic, and to break the false alternative between depoliticised democracies, based on the segmentation of societies into different electoral clienteles, and populist democracies promoted by demagogues on all sides? This would require a renewed sense of our collective destinies and the virtues of republican solidarity.

The debate is moderated by Anne-Lorraine Bujon, editor-in-chief of Revue Esprit.