Home / Videos / Energy Transitions in Europe: The role of cities, regions and territories

Energy Transitions in Europe: The role of cities, regions and territories 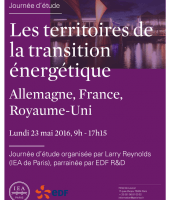 European countries are attempting to make an ‘energy transition’ to address climate change and the urgent need to reduce CO2 emissions. City and regional authorities along with local communities are called on to play a leading role in this. But there are different and often competing visions of what this energy transition should look like. Some actors advance localised and decentralised versions of a future energy system that often contrast with other more centralised national or continental strategies.

The workshop will bring together researchers from Germany, Britain and France to examine what is happening, compare experiences and debate what needs to be done.

How have local, city and community energy transitions developed in the different national contexts of the three countries?

How do strategies and visions of localised energy production and distribution fit with national and global processes of energy transition? What kinds of social, economic, technical and governance problems are encountered?

What are the relationships between public, private and community actors? What are their motivations and rationales? What are the tensions and also the dynamics of cooperation between these different kinds of institutions? How do actors at different scales, from national to local work with each other?

Which kinds of regulation frameworks and financing arrangements are found to encourage these local initiatives? How can we understand the tensions and resistances but also the dynamics of cooperation between local energy ecosystems and the national institutions which ensure energy safety and fair development between the regions and their territories?

This workshop will give us the opportunity to study the energy transition process in Europe, and to examine the dynamics of change between local and national scales across different countries and at the European Union level.