Quality of Work and Psychosocial Risks: A French-British Comparison 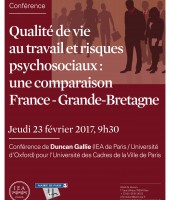 Work pressure has been rising in most European societies since the economic crisis of 2008, contributing to increased psychosocial risks for employees. There is now extensive research that shows that psychosocial risks have severe consequences for both psychological and physical health. The presentation discusses the current state of research on psychosocial risks and the types of work and employment conditions that have been found to accentuate or moderate them. Relatively little however is known about how such factors are affected by the broader institutional characteristics of societies. To explore this, the patterns of change in the key risk factors are compared in France and Britain – two countries that provide a sharp contrast in terms of their institutional structures. France has a relatively centralized and highly regulated system of employment relations, while Britain is characterized by a decentralized and weakly regulated system. The comparison of the two countries leads to a consideration of the potential role of policy in affecting the development of psychosocial risks.