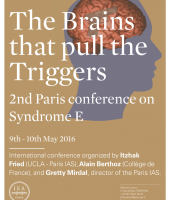 The transformation of groups of previously nonviolent individuals into repetitive killers of defenseless members of society has been a recurring phenomenon throughout history. This apparent transition of large numbers of seemingly normal, “ordinary” individuals, to perpetrators of extreme atrocities is one of the most striking variants of human behavior, but often appear incomprehensible to victims and bystanders and in retrospect even to the perpetrators themselves and to society in general.

This transition is characterized by a set of symptoms and signs for which a common syndrome has been proposed, Syndrome E (Fried, Lancet, 1997). The purpose of such designation is not to medicalize this form of human behavior, but to provide a framework for future discussion and multidisciplinary discourse and for potential insights that might lead to early detection and prevention. Individuals expressing the syndrome show obsessive ideation, compulsive repetition, rapid desensitization to violence, diminished affective reactivity, hyper arousal, group contagion, and failure to adapt to changes in stimulus- reinforcement associations. A pathophysiological model — “cognitive fracture” — was hypothesized, where hyper-aroused medial prefrontal cortices tonically inhibit the amygdala and are no longer regulated by visceral and somatic homoeostatic controls ordinarily supplied by subcortical systems. Thus, the syndrome is a product of neocortical development rather than the manifestation of a disinhibited primitive brain. The acts performed by the perpetrators are not haphazard acts of violence performed at the “heat of battle”, but repetitive automatized acts performed with affective flatness and desensitization, which have an uncanny need for mechanization and repetition that dehumanize both victims and perpetrators.

Notable manifestation of this syndrome can be found throughout history, yet its relevance is still ever present, as seen in recent massive killings carried out by various groups nowadays and in the voluntary participations of previously nonviolent individuals, including young men and women from Europe and elsewhere in these acts. The readily available almost instantaneous visual depiction of these grim phenomena by media offers an opportunity to raise societal interest and ferment systematic inquiry and potential action. Furthermore, rapid developments in cognitive and social neuroscience, along with a growing interest of society in exploring the human brain, as demonstrated recently by large initiatives by US and European governments, offer better opportunity to understand the biological roots of Syndrome E. The final common pathway of the syndrome is a single individual, a single brain, which pulls the trigger.

The Brains that Pull the Triggers, a special conference under the auspices of the Paris Institute for Advanced Study, will take place for the second year at the magnificent Hotel de Lauzun in Paris and will bring together scientists and scholars from the human, social and brain sciences. The central focus of the conference is not the victims of atrocities but the perpetrators. We hope this year to have a more extensive coverage of neuroscience aspects, as well as a more clear link to roots in psychiatry and to the use of appropriate terminology from the social sciences. The aim is to increase our understanding of the perpetrator’s mind, and thus inevitably to the brain mechanisms which pull the triggers and make this most extreme and disastrous of human behavior possible. The hope is that such understanding will be useful and aid society in addressing this problem.

“Arguably the biggest challenge for interdisciplinary dialogue across the fields that consider brain and behavior…a bold and important attempt to bring interdisciplinary approach to one of the biggest questions facing humanity", Nature, 521:260, 2015 (Editorial on the First Paris Conference on Syndrome E)

Introduction : Itzhak Fried (UCLA / IEA Paris / Tel-Aviv University): The Brains that Pull the Triggers: "An Ordinary Guy with a Kalashnikov"


Session 2: Pathology: One of us or one unlike us?

Breivik and Beyond: “One of us” behind the Trigger - Åsne Seierstad (Norway)

What's wrong with the valuation system in a terrorist brain? - Mathias Pessiglione (ICM)

What can the clinic of “difficult” adolescents tell us about Syndrome E? - Michel Botbol (CHRU Brest)

Why I didn't do it... can other people reduce individual responsibility for action? - Patrick Haggard (UCL / IEA Paris)