Home / Publications / What is Microhistory? Theory and Practice

What is Microhistory? Theory and Practice 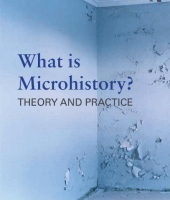 This unique and detailed analysis provides the first accessible and comprehensive introduction to the origins, development, methodology of microhistory – one of the most significant innovations in historical scholarship to have emerged in the last few decades.

The introduction guides the reader through the best-known example of microstoria, The Cheese and the Worms by Carlo Ginzburg, and explains the benefits of studying an event, place or person in microscopic detail. In Part I, István M. Szijártó examines the historiography of microhistory in the Italian, French, Germanic and the Anglo-Saxon traditions, shedding light on the roots of microhistory and asking where it is headed. In Part II, Sigurður Gylfi Magnússon uses a carefully selected case study to show the important difference between the disciplines of macro- and microhistory and to offer practical instructions for those historians wishing to undertake micro-level analysis. These parts are tied together by a Postscript in which the status of microhistory within contemporary historiography is examined and its possibilities for the future evaluated.

What is Microhistory? surveys the significant characteristics shared by large groups of microhistorians, and how these have now established an acknowledged place within any general discussion of the theory and methodology of history as an academic discipline.