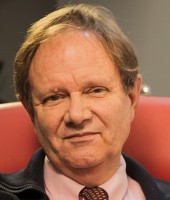 James F. Hollifield is Ora Nixon Arnold Professor in International Political Economy and Director of the Tower Center at Southern Methodist University (SMU) in Dallas, Texas. He is a member of the New York Council on Foreign Relations and a Global Fellow at the Wilson Center in Washington, DC.  Hollifield has written widely on issues of political and economic development with a focus on migration, and he has served as an advisor to governments in North and South America, Europe, the Middle East, and Africa. He consults with many international organizations, including the United Nations, the World Bank, the Inter-American Development Bank, the European Union, the OECD, and the Organization of American States. In addition to SMU, he has taught at Brandeis University, served as a Research Fellow at Harvard’s Center for European Studies and MIT’s Center for International Studies, and in 1992 was appointed Associate Director of Research at the CNRS and Sciences Po in Paris.  He is currently a Fellow at the Institut zur Zukunft der Arbeit (IZA) at the University of Bonn and the Global Migration Centre at the Graduate Institute of International and Development Studies in Geneva. In 2016, Hollifield received a Distinguished Scholar Award from the International Studies Association.

In September 2021, he joined the Paris IAS as part of the French Institutes for Advanced Study fellowship program - FIAS - co-funded by the European Union’s Horizon 2020 research and innovation programme under the Marie Skłodowska-Curie grant agreement No 945408. His fellowship also benefits from the support of the RFIEA+ LABEX, with a national funding (Grant ANR-11-LABX-0027-01).

This project sets forth a new research agenda in the interdisciplinary field of migration studies by critically engaging with the concept of the migration state and expanding its application to a range of historical and comparative cases beyond classical cases in Western Europe and the United States. The migration state concept points to the centrality of migration as a core state function and provides a framework for understanding competing interests that states face in managing migration, with a focus on the trade-offs between economic openness and political closure - what Hollifield calls the liberal paradox. In the almost thirty years since he introduced the concept, international migration has become even more central to how states regulate the labor market, respond to demographic trends, craft national security strategy, and shape public debates on citizenship and national identity.

Bringing together work across a range of cases, the book will theorize varieties of migration states, proposing typologies and applications of the migration state concept to develop a truly global approach to understanding migration. The book covers major sending countries, recent countries of immigration, and countries that are simultaneously countries of origin, destination, and transit, including liberal democracies and autocracies, former imperial powers and post-colonial states, as well as the richest to the poorest countries in the world. Based on thirty years of research in different regions of the globe, the research for this book combines insights from comparative and international politics, economics, demography, and sociology, as well as historical and post-colonial approaches.